Marrakech or Marrakech is a major city in the northwest African nation of Morocco. Marrakech is possibly the most important of Morocco's four former imperial cities (cities that were built by Moroccan Berber empires). The Jemaa el-Fnaa is one of the best-known squares in Africa and is the centre of city activity and trade. It has been described as a "world-famous square", "a metaphorical urban icon, a bridge between the past and the present, the place where (spectacularized) Moroccan tradition encounters modernity." It has been part of the UNESCO World Heritage site since 1985. Historically this square was used for public decapitations by rulers who sought to maintain their power by frightening the public. The square attracted dwellers from the surrounding desert and mountains to trade here, and stalls were raised in the square from early in its history. The square attracted tradesmen, snake charmers ("wild, dark, frenzied men with long disheveled hair falling over their naked shoulders"), dancing boys of the Chleuh Atlas tribe, and musicians playing pipes, tambourines and African drums. Richard Hamilton said that Jemaa el-Fnaa once "reeked of Berber particularism, of backward-looking, ill-educated countrymen, rather than the reformist, pan-Arab internationalism and command economy that were the imagined future." Today the square attracts people from a diversity of social and ethnic backgrounds and tourists from all around the world. Snake charmers, acrobats, magicians, mystics, musicians, monkey trainers, herb sellers, story-tellers, dentists, pickpockets, and entertainers in medieval garb still populate the square.

Casablanca , is the largest city of Morocco, located in the western part of the country on the Atlantic Ocean. It is also the largest city in the Maghreb, as well as one of the largest and most important cities in Africa, both economically and demographically.  The leading Moroccan companies and international corporations doing business there have their headquarters and main industrial facilities in Casablanca. Casablanca is considered the economic and business center of Morocco, while the national political capital is Rabat.

Rabat is the capital of Morocco and its seventh largest city center with an urban population of approximately 580,000 (2014)and a metropolitan population of over 1.2 million. It is also the capital of the Rabat-Salé-Kénitra administrative region. Rabat is accessible by train through the ONCF system and by plane through the nearby Rabat–Salé Airport.

Fes or Fes is the second largest city of Morocco, with a population of 1.1 million (2014). Fes was the capital of Morocco until 1925, and is now the capital of the Fès-Boulemane administrative region. The modern Turkish name for Morocco, Fas, originally referred only to the capital city. The city has two old medinas, the larger of which is Fes el Bali. It is listed as a UNESCO World Heritage Site and is believed to be one of the world's largest car-free urban areas. Al-Qarawiyyin, founded in AD 859, is the oldest continuously functioning madrasa in the world. The city has been called the "Mecca of the West" and the "Athens of Africa".

Merzouga is a small village in southeastern Morocco, about 35 kilometres southeast of Rissani, about 55 km from Erfoud, and about 50 km from the Algerian border. The village is known for its proximity to Erg Chebbi, a Saharan erg, and it is for this reason a part of the itineraries of many tourists visiting Morocco. Merzouga has the largest natural underground body of water in Morocco. Near the dunes of Erg Chebbi there are some other less known villages: Hassilabied 4 km away, Tanamoust 3 km away, Takoujt 1.5 km away, Khamlia 7 km away and Tisserdmine 15 km away.

Meknes is a city in northern Morocco and the sixth largest city of the kingdom. Meknes was the capital of Morocco under the reign of Moulay Ismail (1672–1727), before it was relocated to Marrakech. A Berber tribe called the Miknasa, originally from the Tunisian south, settled here in the 9th century.Meknes has a Mediterranean climate with continental influences. Its climate is similar to that in Sevilla. Meknes saw its golden age as the imperial capital of Moulay Ismail following his accession to the Sultanate of Morocco (1672–1727). He installed under the old city a large prison to house Christian sailors captured on the sea, and also constructed numerous edifices, gardens, monumental gates, mosques (whence the city's nickname of "City of a Hundred Minarets") and the large line of wall, having a length of 40 kilometres (25 miles).

Aït Benhaddou is a fortified city, or ksar, along the former caravan route between the Sahara and Marrakech in present-day Morocco. Most citizens living in the area now live in more modern dwellings in a nearby village, although there are 4 families still living in the ancient city. This giant fortification, which is made up of six Kasbahs and nearly fifty ksars which are individual Kasbahs, is a great example of earthen clay architecture. Which is also use in Moroccan architecture.

Chefchaouen  is a city in northwest Morocco. It is the chief town of the province of the same name, and is noted for its buildings in shades of blue. Chefchaouen or Chaouen, as it is often called by Moroccans, is a popular tourist destination because of its proximity to Tangier and the Spanish enclave of Ceuta. The name refers to the shape of the mountain tops above the town, that look like the two horns (chaoua) of a goat. "Chef Chaouen" derives from the Berber word for horns, Ichawen. There are approximately two hundred hotels catering to the summer influx of European tourists. One distinction possessed by Chefchaouen is its blue-rinsed houses and buildings.

Essaouira is a city in the western Moroccan economic region of Marrakech-Tensift-Al Haouz, on the Atlantic coast.The city was known in the time of 11th-century geographer al-Bakri and, as he reported, was called Sidi Megdoul. In the 16th-century, a corruption of this name became known to the Portuguese as Mogador or Mogadore. The Berber and Arabic names mean the wall, a reference to the fortress walls that originally enclosed the city. 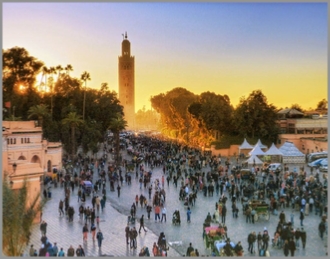 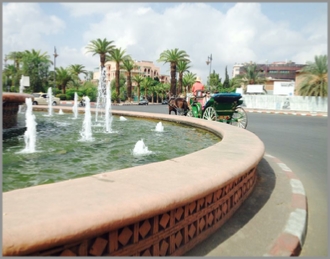 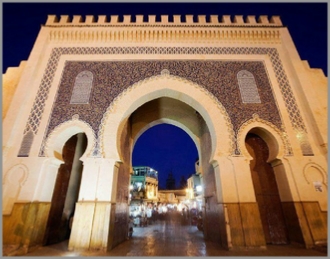 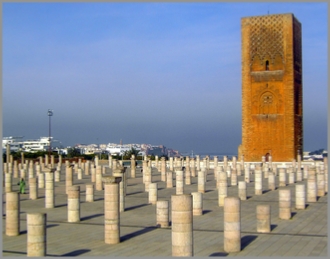 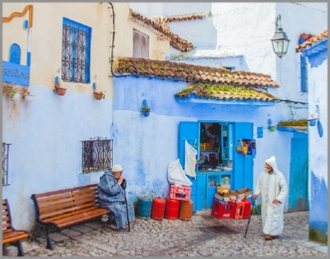 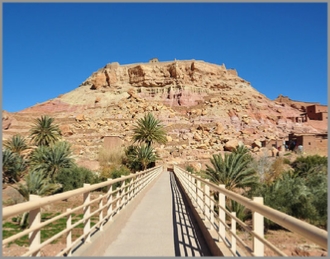